Skip to Main Content
No poverty: in Guatemala with BG4SDGs - Time to Change

No poverty: in Guatemala with BG4SDGs - Time to Change

Every hour, about 300 trucks full of garbage make their way inside the large dump that collects the garbage of the most populous urban area in all of Central America: Ciudad del Guatemala.

Here, in what is called the "Zone 3 landfill" over the past 40 years, a veritable community of people has developed who try to survive in extreme poverty, deriving the little they need to live from what the rest of the city discards, namely garbage.

According to some estimates, more than 30,000 people now live in the Zone 3 landfill crammed into precarious and makeshift housing without access to running water. It is an extreme situation that the pandemic has made even more desperate, calling the international community to much-needed and swift action.

The story of the eighth chapter of BG4SDGs - Time to Change, our project to delve into the state of the art of the process of achieving the 17 goals of the UN 2030 Agenda, starts from this image. On this occasion, the lens of Stefano Guindani, photographer and curator of the project, focused on investigating the situation related to Sustainable Development Goal (SDG) number 1 "Eradicate poverty in all its forms and everywhere."

According to a World Bank report, there are about 3 billion people in the world who reside in urban areas and produce 1.3 billion tons of solid waste each year. In a Planet whose climate is increasingly crying out for help, it is clear that reducing this waste is more than essential. Yet there are those in the world who not only live among the waste, but even rely on it to be able to feed themselves.

In Central America, for example, the phenomenon of communities living in basureros is steadily increasing in places such as Haiti, Nicaragua, Honduras, and Guatemala itself. In these places in which tons of objects lie for decades waiting to complete their life cycle, entire social groups try to survive amid garbage, scrap, foul odors and total absence of the minimum hygienic conditions.

Right there where items are left to their own devices without any recovery project, families of men, women and children desperately try to make ends meet by salvaging some leftover food or rags with which to clothe themselves.

Education among the most effective solutions

According to data from the World Food Program-the United Nations food assistance agency-there are 795 million people living in absolute poverty in the world today. In other words, more than one in ten earthlings live on less than $1.90 a day, the economic threshold that defines the difference between poverty and absolute poverty. The majority of these (42.7 percent) live in Sub-Saharan Africa, but it is a phenomenon that is growing at all latitudes, also aided by the pandemic that has aggravated the situation in Asia, Latin America and even Europe.

In this context, it is clear that SDG number 1 is of crucial importance that is undoubtedly superior to all the other 16 goals. Defeating poverty is a priority of contemporary society, but synergies and international projects are needed.

The most effective solution in the fight against poverty is one related to education, the only way for people to emerge from depressed socioeconomic contexts. That is when projects such as the street schools in Haiti can prove decisive in steering the future of entire generations in a brighter direction. 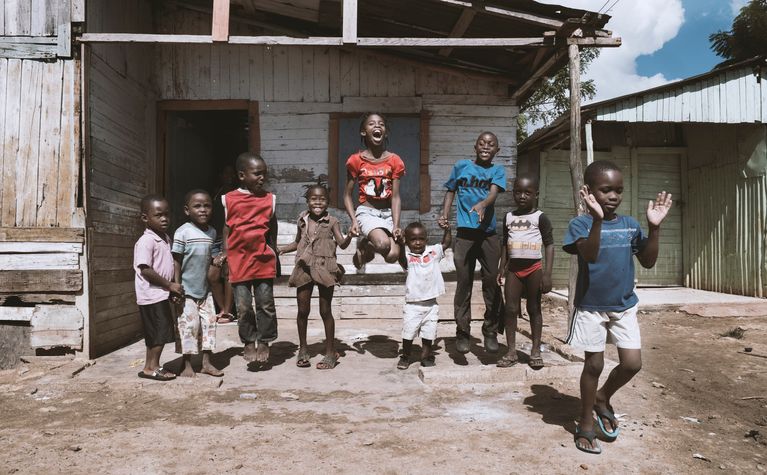 It is strange to think that it is the welfare of the few that ruins the existence of the many but at the same time allows their survival; in a way that is hard to imagine, but it is only with the scraps of the evolved society that even basureros can allow their families to survive.