Skip to Main Content
Banca Generali and LIUC: the results of the private banking observatory

Banca Generali and LIUC: the results of the private banking observatory

Private banking is an increasingly growing sector, despite economic, political and social turmoil: these are the findings of the study prepared by our Observatory in collaboration with LIUC

Launched in 2016, our Observatory's Private Banking Index (PB-I), founded in conjunction with LIUC - Cattaneo University, paints an extremely positive 2021 for the private banking sector, despite the negative impact generated on the economy as a whole by both the continuation of the pandemic and the first signs of issues related to energy source costs.

The index registered a value of 133.53 basis points, a sign of an increasingly healthy and still expanding sector. Last year, the figure for 2020 stood at 125.42 basis points: thus, the trend undertaken by the sector is undoubtedly aimed at development and growth (the indicator now shows a five-year expansive trend), with more than satisfactory intensity even over the past year, if one takes into account the difficulties and tortuousness that have continued to affect countries worldwide.

The Observatory's study activities, which have been underway for more than five years and are aimed at delving into the main dynamics of the industry, have always emphasized the extreme complexity of the private banking industry, which is characterized by numerous variables that can be key determinants in fully understanding its performance.

The Private Banking Index: the context

At the level of the socio-economic context, the evolution of GDP (Gross Domestic Product) once again makes a contribution in positive terms, against the backdrop of a good recovery (+6.6 percent compared to the 2020 ISTAT figure), certainly attributable to the recovery from the harsher effects of the pandemic. The net wealth of Italian households not only remains stable, but actually registers a good increase, which can in fact be explained by a positive balance between the choice not to "spend" due to uncertain conditions, on the one hand, and the recourse to the use of savings in situations characterized by difficulties in the face of the momentary absence of income streams.

Further support for the positive performance of private banking comes, moreover, from analysis of the Gini Index, which measures the concentration of income and wealth (as concentration increases, potential "private" assets increase). Historical phases of crisis and emergency are wont, in this sense, to accentuate the imbalance between different segments of the population. 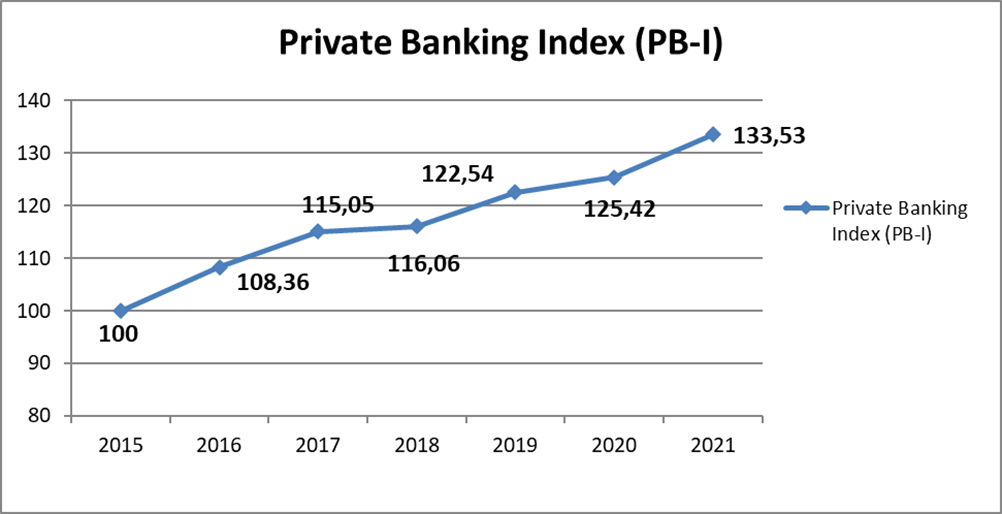 With reference to the private banking industry, the number of potential clients (measured in "private" households) remains substantially stable, albeit growing for the fifth consecutive year (consistent with the increase in the Gini Index), thus proving to be a limitedly influential variable, while a discrete impact on the indicator's trend comes from the number of services offered by players active in the market, increasingly seeking a competitive advantage stemming from the differentiation and completeness of their offerings. This evidence appears to be consistent with the growing strategic importance attributed to innovative advisory and support services, as well as to the introduction of alternative investment instruments on the market.

So, if the macroeconomic environment appears, in fact, still in a transitional phase, the greatest impetus for growth comes for the sector precisely from the dynamics within it, further confirming the great potential that the sector is still able to eviscerate in our country.

During 2021, the performance of regulated markets offered finally positive indications for the construction of the Private Banking Index. In fact, the main Stock Exchange Index, in the face of a year of partial recovery of the situation at the macroeconomic level, after a 2020 of great difficulties, stood at 27,347 points (vs. 22,232 points), thus determining a more than positive contribution in the calculation of the Observatory's proprietary indicator. The figure under consideration clearly refers to the last session of last year, which was not yet affected by the negative impact of the political crisis and war scenarios gripping Europe since last March. Moreover, in this context that has characterized the markets since the beginning of 2022, the very recent domestic political crisis in our country is also grafted in.

At the same time, the cluster of companies created ad hoc by the Observatory and related to the private banking sector shows a satisfactory performance during the year, which finds its main evidence in the return to a higher level of market capitalization than in 2015, after a three-year period of declines and a two-year period, 2019-2020, of first signs of recovery: in this way, the contribution to the determination of the Private Banking Index is positive. Just as positive appears to be the effect produced by the cluster of companies representing luxury goods, which record a good recovery, sufficient to constitute a positive impulse element in the snapshot of the sector's state of health, thus no longer representing a "limiting" or neutral factor as was the case until 2019.

Sector, which, therefore, momentarily finds the "sap" for growth and development essentially in the vibrancy and health of the players that make up the system as a whole: the operators, the "private" clientele and the matrix of products/services offered, which is increasingly evolved thanks to the continuous rethinking and refinement of the business model. Threats, for 2022, will concern international economic and political scenarios and, not least, the evolution of the domestic political situation.

The objective of the Observatory

To this end, the Observatory sponsored by LIUC and Banca Generali, this year in collaboration with BNY Mellon and Capital Group, among others, conducted research aimed at constructing an indicator capable of effectively representing the evolving health of the sector.

The studies undertaken, aimed at identifying possible areas of influence capable of exerting an impact on the private banking sector, led to the identification of three relevant components, which in turn can be broken down into a series of determining variables: the performance of the private banking sector, i.e., of the market under consideration (taking into account, for example, assets under management, potential clients and products offered); the evolution of the socio-economic context of reference, i.e., of our country (considering, for example, the stock of wealth of Italian households, the evolution of the Gross Domestic Product and the evolution of income concentration in the domestic sphere); the trend of domestic regulated markets (analyzed through the trend of the main Stock Exchange Index, as well as some clusters of companies created ad hoc by the Observatory with reference to the financial sector under consideration and to luxury).

Discover more on our blog!