Value and growth stocks to the test of inflation

Value or growth? Long-term investors have often been faced with this dilemma when choosing which stocks to include in their portfolios.

Today the scenario in the financial markets is profoundly different than in the past: the stock markets are in a negative phase (the Piazza Affari index has lost more than 20 percent since the beginning of the year) and inflation has returned to levels not seen since the 1980s of the last century (i.e., above 8 percent).

Yet even in a radically changed scenario, the distinction between stocks classified as growth (which literally means "growth" in English) and those classified instead as value (a British term meaning "value") still holds sway in the financial community.

Growth and value stocks: what is the difference?

But what does it mean in concrete terms to prefer one or the other of these two categories of securities?

To understand this, one must refer specifically to two factors: the stock's stock market valuation and the company's growth potential. As a rule, growth stocks traditionally have higher valuations than value stocks in terms of the price/earnings ratio, that is, between the price of the same stock recorded in the market and the earnings per share expected in the year. This higher value is justified by the fact that growth stocks belong to companies with high growth potential, which precisely justifies the higher price paid by investors.

Value  stocks, on the other hand, usually belong to companies active in industries now considered "mature," for example energy or utilities, where companies have cash flows that follow a steady trend over time and remunerate shareholders in the form of dividends with some continuity. 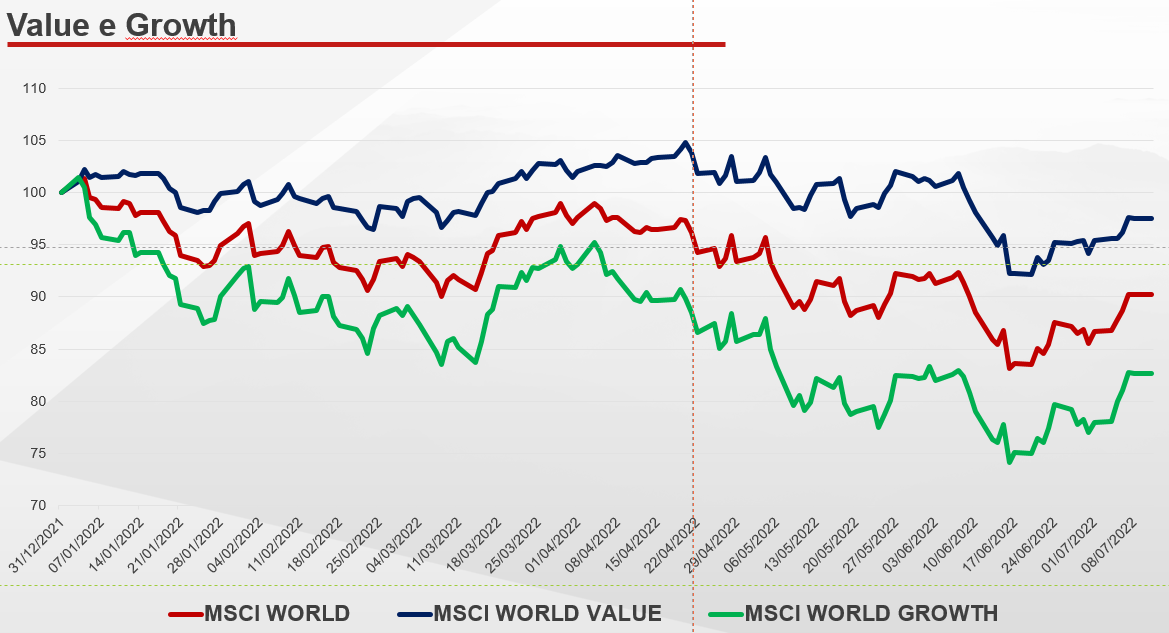 Value or growth: where is it worth investing?

Here then arises a question: is it better to invest in growth stocks or value stocks? On this point, assuming there is an unambiguous answer, there have always been great disagreements in the financial community. And there have also been major differences in behavior even among investors on both sides of the Atlantic.

In the United States, the "home" of tech stocks listed on the Nasdaq, the growth investing "style" has always had a certain appeal despite the fact that one of the world's most famous investors, American Warren Buffet, has always been an advocate of value investing, based on finding value in companies that are too overlooked by the market despite their excellent balance sheet fundamentals.

In contrast, the growth investment style has found somewhat less appeal in Europe, perhaps partly as a result of the lower presence than in the U.S. of hi-tech stocks with disruptive business. To get an idea of what opportunities the two categories of stocks mentioned above offer, it is good to compare the performance of two indices grouping the major stocks listed on international stock exchanges, belonging to either "class."

The first is the Msci Growth Index to which more than 800 stocks are included, including those of large U.S. corporations of the digital age such as Amazon, Apple, Microsoft, Alphabet or Tesla. The other index is the Msci Value, which includes more than 900 stocks of listed companies around the world, mostly operating in some "traditional" sectors such as energy, financial or consumer goods.

This is the case for multinational corporations such as Johnson & Johnson, Procter&Galmble or the oil giant Exxon Mobil. Over the past 10 years (with data as of last June 30), the Msci Growth has achieved an average annualized performance of 11.42 percent compared to the average annualized return of 8.42 percent for the Msci Value index.

Over a decade, growth stocks have thus won the comparison by gaining an average of 3 points more per year. Looking at the very long term, however, the perspective changes: since 1974 (the year the two indices were created) the Msci Growth has achieved an average annualized return of 9.8 percent, compared with 11.2 percent for the Msci Value. Not to mention, then, that the latter index a little less volatile than the other, as it has lost a little less points in bad years for the markets. In the first half of 2022, for example, the Msci had a negative performance of 11 percent versus about -22 percent for the Msci Growth.

The distinction between growth and value stocks has also been the subject of study in academia, starting in particular with the theories developed by Benjamin Graham, economist and author of the essay "The Intelligent Investor," a respected professor of finance at Columbia University in New York who is considered the "father" of value investing and the inspiration for Warren Buffet himself. "The smart investor is a realist who sells to optimists and buys from pessimists," Graham said, pointing out that his rule for making money was simple and based on the assumption, "Buy cheap and sell dear."

In Italy, growth and value stocks were also the subject of study in a paper published years ago by Maurizio Dallocchio and Emanuele Teti, professors of finance at Bocconi. The two professors compared the performance of baskets of value and growth stocks, between 1996 and 2011, showing a stronger performance of value stocks in the long run. However, the data predates the last decade where, as highlighted above, there was instead an unusual outperformance of growth stocks. As always, a lesson can be drawn from this: there is probably not absolutely one category of stocks that is better than the other, but much also depends on the market environment, the investor's goals and needs as well as the time horizon considered.