Skip to Main Content
Pensions and demographic risk: private banking to look at the long term

Pensions and demographic risk: private banking to look at the long term

Retiring later and later, but with less and less generous paychecks

This is the outlook that almost certainly awaits the new generations of Italian workers, who in the future will have to suffer the effects of certain trends that seem unstoppable.

The first is the aging of the population, as certified by ISTAT's demographic estimates: in 2065, according to the national institute of statistics, 33 percent of Italians will in fact be over 65 years old (compared to 23 percent in 2020) while only 14 percent will be under 14 years old.

This demographic trend, inevitably brings with it one effect: an increase in the incidence of public spending allocated to pensions, in an increasingly elderly country. To realize this, one need only look at the data released last year by the State General Accounting Office.

In 2020, spending on pensions hit an all-time high of 17 percent of GDP in Italy. More than one-sixth of what our country produces each year is thus used to pay social security checks. In the 1970s, spending was around 9 percent of GDP, rising above 10 percent in the 1980s and gradually approaching toward 15 percent in the third millennium. In the decades to come, again according to the State General Accounting Office, spending on pensions will remain above 16 percent of GDP until 2050, then glide a bit to 13 percent in 2070, as the generous welfare checks collected by the baby boom generation are lost.

The evolution of the italian social security system over the years

But there is a second factor that Italians need to consider. In 1995, precisely to prevent the aging population from completely blowing up the pension system's accounts, a pension reform (better known as the Dini Reform, later supplemented in 2011 with the Fornero Reform) was passed that radically changed the method of calculating Inps checks, for workers hired from 1996 onward. Prior to that year, the amount of the pension depended largely on the average of final salaries: for those hired from '96 onward, on the other hand, the amount of the pension depends only on the amount of contributions paid over the course of the career.

The more you pay in, the higher your pension will be.

Unfortunately, however, many young Italians find stable employment very late in life and often face long periods of unemployment, thus making few contributions over the course of their careers.

Those who have a continuous career, without ever being unemployed, may be able to cover with their accrued pension 65-70% of their last salaries, received before going into retirement. Those, on the other hand, who are likely to be out of work for a long time risk a pension of no more than 50 percent of their final salary.

Therefore, there is a need to run for cover by creating a spare income, so as not to pull heavily on the belt during old age. How to accomplish this?  A good financial adviser who helps clients do proper financial planning usually recommends joining supplementary pension funds or policies. 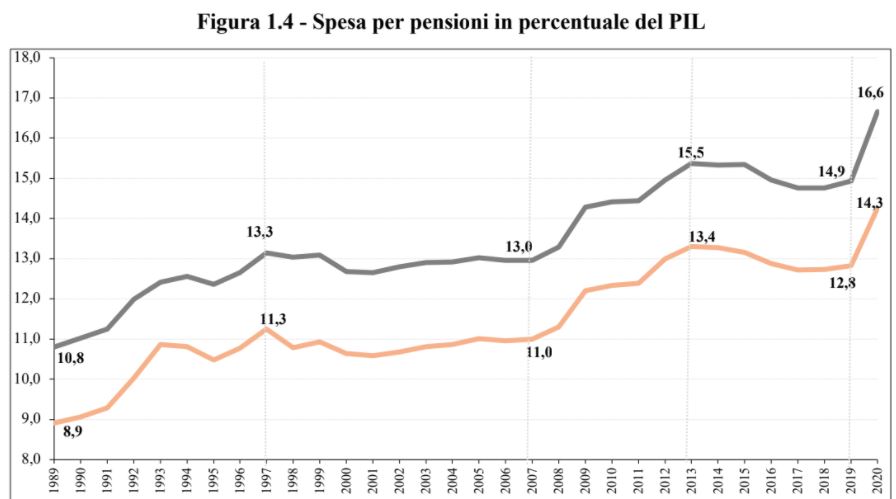 Pension spending as a percentage of GDP since 1989 (Source Pmi.it)

What are pension funds?

These are financial instruments that have precisely the task of creating a private annuity supplementary to that of the Inps, as soon as the worker accrues the right to retire according to legal requirements. In practice, those who join pension funds choose i to pay a portion of their income periodically into these financial instruments (usually every month or every quarter).

Those with an employee contract can allocate severance pay (TFR), the portion of salary usually set aside for severance pay, to it each year. The money paid in is then invested by fund managers in the financial markets, with varying degrees of exposure to risk: those who are willing to take losses in the short term but want a better chance of gains in the long term usually choose funds that invest mainly in equities.

Instead, those who want more stable but probably lower returns in the long run usually turn to funds that invest primarily in bonds or government securities. When the worker reaches retirement age and accrues the right to collect his or her Inps check, the capital paid into the supplementary pension funds (plus accrued returns) is transformed into a spare annuity that accompanies him or her for life throughout old age.

Supplementary pensions therefore have a very important function in Italy even if, as Alessandro Rosina, professor of Demography and Social Statistics at the Faculty of Economics at the Catholic University of Milan, highlighted, an extra step is needed, that is, a greater effort by the entire Country System. In his essay titled "Demographic Crisis, Policies for a Country that Has Stopped Growing," Rosina highlights how Italy is one of the nations in the world "where the ­demographic winter is most pronounced."

So, according to the Catholic economist, "if current trends are not reversed, we will inevitably face irreparable criticality." This is because Italy, in addition to having a long-lived population like many other advanced industrial countries, unfortunately also has a low birth rate. It is not that our countrymen desire fewer children than foreigners; rather, for Rosina south of the Alps there are "less efficient policies in favor of families and new generations."

For this reason, Rosina points in his book to systemic policies (from childcare services to a single, universal child allowance to incisive labor reforms) to enable "new generations to truly feel like protagonists in a country that grows with them." 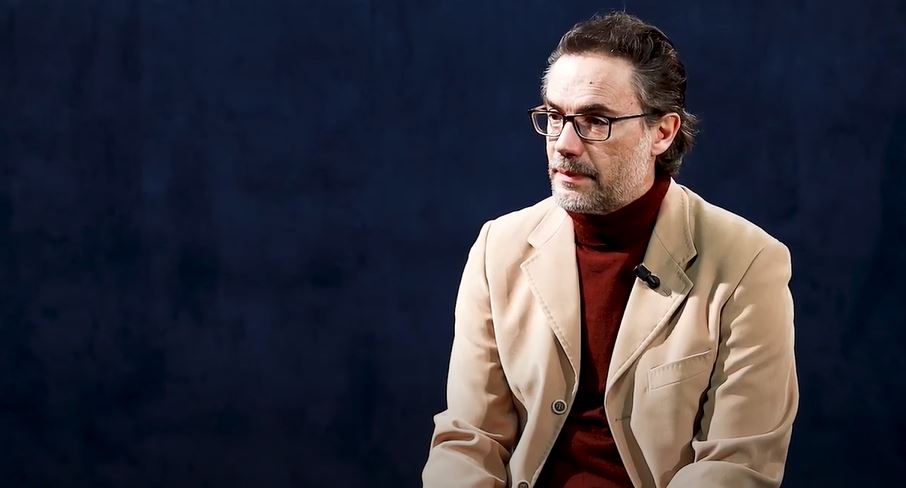 Alessandro Rosina, full professor of Demography and Social Statistics at the Faculty of Economics, Catholic University of Milan

If we look at the population of 2034 and refer to the 0-12 age group, the one that depends strictly on the dynamics of future births, from about 6.3 million today, the median scenario contemplates a descent to 5.4 million while the high scenario to 5.9 million.