Skip to Main Content
Stock exchanges: who wins and who loses in the first half of 2022

Stock exchanges: who wins and who loses in the first half of 2022

A 22 percent drop since the beginning of the year. This is the less-than-exciting performance of the Ftse Mib index of Piazza Affari in the first half of the year.

Among the stock exchanges of the large European countries, Milan's was the worst in the first half of 2022, although foreign indexes certainly do not have a banner six-month period behind them: the Cac40 in Paris lost about 17 percent in six months, Frankfurt more than 19 percent while London's Ftse100 limited the declines somewhat, stopping at -3 percent. Also in the Old Continent, Zurich's Smi also gave up nearly 17 percentage points in six months.

Moving across the Atlantic, the music does not change. On the contrary, in New York the six-month decline in stock markets was in many cases greater than in Europe. In fact, the S&P 500 index, which groups the most important companies listed on overseas markets, has behind it a half-year negative performance of more than 20 percent while the Nasdaq, the list where technology stocks are traded, lost more than 29 percent.

Less worse was the case for Tokyo's Nikkei 225, which closed the first six months of 2022 with a negative performance of about 8 percentage points, while in China the Shanghai Stock Exchange ended the half-year with -6.6 percent.

Summing up, it is difficult to recall in recent history a half-year with more pronounced declines for international stock markets than the one we have just left behind. Blame it, of course, on the international geopolitical scenario, which, with the outbreak of war in Ukraine, brought quite a bit of volatility to the financial markets.

Indeed, rising commodity prices, linked to the war but also to the growth in international demand following the pandemic, radically changed the outlook for the world economy and generated an inflation rate not seen since the 1980s.

As if that were not enough, there has also been a change of course in the monetary policy of the central banks (the Federal Reserve in the United States as well as the ECB in Europe), which, precisely to stem the rise in prices, have announced the raising of interest rates after bringing them below zero and lowering them to lows never before seen in history.

"The very negative performance of the U.S. market was caused both by the high level of inflation, which reached 8.6 percent in June, and by the central bank's change in monetary policy," says Corrado Cominotto, head of Banca Generali's Active Asset Management, who highlights one aspect: in the first six months of the year, the Federal Reserve (the U.S. central bank) raised its benchmark rate by 150 basis points.  "The rise in yields has weighed particularly on technology stocks, (the Nasdaq index has given up 23 percent in euros and 30 percent in local currency) whose growth rates are negatively correlated with rate trends," adds Cominotto.

It must be said, however, that market reality has, as always, several facets. While it is true, in fact, that the average performance of stock markets has been negative in all the major industrialized countries, not all asset classes have behaved in the same way. There are some, in fact, that have had double-digit positive performances, even giving some satisfaction to investors.

To realize this, one only has to look, for example, at representative indices of commodity prices, such as the CRB Commodity Index, which, in the past 6 months, in the wake of soaring prices, has gained a total of about 26 percent while in one year it has risen as much as 36 percent.

The music does not change when looking at the average returns of funds in various categories surveyed by Morningstar, a company that specializes in analyzing asset management products. Since the beginning of the year, equity funds investing in the energy sector have gained almost 22 percent on average. By contrast, the worst performing category has been equity funds specializing in technology stocks, which, again since the beginning of 2022, now have an average negative performance of 27 percent behind them after putting up stellar gains during previous years.

"The only sectors in Europe that managed to put up a positive performance were energy (6.4 percent) and telecommunications (2.1 percent)," recalls Generoso Perrotta, head of Advisory at Banca Generali, "The former benefited from the upward trend in oil prices while the latter from the stability of cash flows and the speculative appeal related to Deutsche Telekom's sale of the tower business."

On the opposite front, Perrotta recalls that sectors most exposed to domestic demand, such as retail, suffered the most in the first part of the year with a drop of more than 30 percent. Defensive sectors such as pharmaceuticals and utilities also ended the first half down, by 12.3 percent and 16.1 percent, respectively.

"The decline in the first six months had the consequence of bringing European market prices in terms of balance sheet multiples back to values below the long-term average and to values that had not been touched in nearly 10 years," points out head of Advisory. 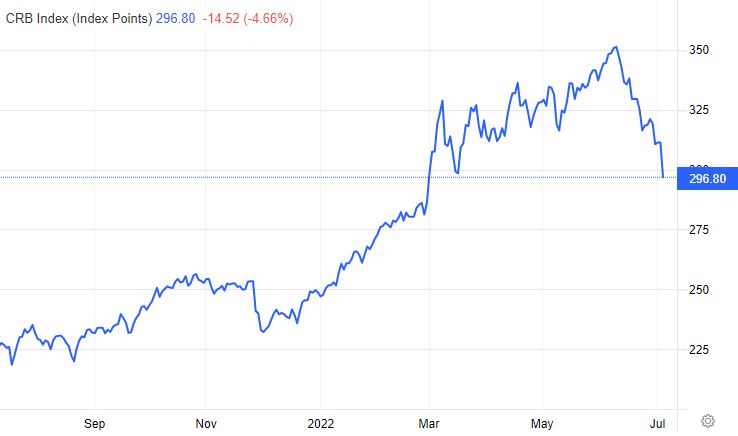 It did not go any better in the bond sector: "Such a dramatic start to the year has not been evidenced for decades, in fact almost all bond asset classes recorded strongly negative results (even over -10%) both on government bonds and credit," comments Luca Longhi, Banca Generali Total Return Portfolio manager, who adds, "the rate hike carried out by central banks to counteract continuously rising inflation was the main deterioration factor especially for high duration bonds. Also on credit, volatility has hit hard and spread widening has been relevant especially on high yields (where Default Rates are expected to increase) and emerging markets (also affected by the individual repercussions of the Russian-Ukrainian conflict)."

All of the data highlighted above once again show an important point: during downturns in the markets, there are some asset classes that move downward but there are some that instead follow a counter-trend direction.

Which shows the importance of having a well-diversified portfolio, spread across different asset classes to balance risks and opportunities for gains between them, with the help of a financial advisor.

The only sectors in Europe that managed to put up a positive performance were energy (6.4 percent) and telecommunications (2.1 percent). The former benefited from the upward trend in oil prices while the latter from the stability of cash flows and the speculative appeal related to Deutsche Telekom's sale of the tower business